To share your memory on the wall of Robert J. Bordeaux, sign in using one of the following options:

Provide comfort for the family by sending flowers or planting a tree in memory of Robert J. Bordeaux

Provide comfort for the family by sending flowers or planting a tree in memory of Robert J. Bordeaux

Beloved husband, father, grandfather and great-grandfather passed away at his home, Friday, May 28, 2021 surrounded by his family. Bob was born in... Read More
Robert J. Bordeaux,

Beloved husband, father, grandfather and great-grandfather passed away at his home, Friday, May 28, 2021 surrounded by his family. Bob was born in Saginaw, MI on July 23, 1942, son of the late Robert and Dorothy (Willman) Bordeaux. He attended Saint Andrews Catholic School where he was an all-star athlete in baseball, basketball, and football. Bob went on to play football for the University of Colorado, and later transferred to Central Michigan University, where he was a member of Sigma Phi Epsilon. He graduated from Central Michigan University in 1965, earning his Bachelors’ of Science in Social Science, where he went on to teach History at Buena Vista High School, and coached the junior varsity football team. Bob was known to stay after school with the students to play a few rounds of basketball. Sports were an important part of Bob’s life and he was a loyal Michigan State Fan, where he truly bled green and white. He celebrated Spartan victories in both football and basketball, and particularly enjoyed March Madness.

Bob met his first love, Judi, shortly after college where they were happily married for 42 years, and raised three wonderful children. Bob was a brilliant businessman and was very prominent in the business community, where he was President of Midwest Sales Inc., Allied Insulation, MIS Insulation, MIS Environmental, and was the founding father of The Sawmill Golf Club. Most recently, he served on the Board of Directors for Caravan Facilities Management for the last several years. Bob was heavily involved in the community, and was a long-time member and later became President of The Saginaw Fordney Club. He was very involved in the Catholic Church, and dedicated a tremendous amount of time to youth athletics, including coaching hockey for Nouvel Catholic Central. He volunteered regularly and was passionate about making the world a better place.

Bob lived life to the fullest. His laugh was contagious and had a one-of-a kind sense of humor. It was often difficult to know whether or not he was joking until you saw that twinkle in his eye and a slight grin on his face. Bob’s favorite past-time was being on the water, whether it was boating, fishing, or just enjoying the sunshine. Northern Michigan and Marco Island, Florida were his two favorite places to spend his time with those he loved. Bob had an incredible sense of style and had such a presence when he walked into a room.

Above all, the most important part of Bob’s life was his family. Family always came first and he was there when any of his family members needed him. Bob coached both of his sons, Rob and Brandon, in hockey and baseball. It’s not surprising that they both have become coaches themselves, as they learned from the best. Bob enjoyed attending the activities of his children and grandchildren. From dance and soccer to hockey and school events, he was supportive and encouraging, but above all, he was just so proud. He loved what he called “popcorn parties” with his grandchildren, golfcart rides, cooking and fishing. His motto that he shared with his family repeatedly was “Never, ever give up.”

Bob found immeasurable happiness after marrying his wife, Tracy, on November 26, 2015 in a beautiful beach ceremony on Marco Island. It brought Bob so much joy that Tracy instantly became such a special part of his family. Together, they found joy in traveling and loved making new friends at Happy Hour. It was a lifelong dream of Bob’s to travel to Europe, and he was able to experience that with Tracy.

Funeral Liturgy will take place 11:00 a.m. Friday, June 4, 2021 at St. Dominic Parish, St. Stephen Catholic Church, 1310 Malzahn, Saginaw. Rev. Fr. Steven Gavit will officiate with burial in St. Andrew Cemetery. Friends may visit at The Snow Funeral Home, 3775 N. Center Rd. (between Shattuck and McCarty), where the family will be present on Thursday from 4:00 p.m. to 7:00 p.m. and at the church on Friday from 10:00 a.m. until time of Mass. If you desire to make a charitable contribution in memory of Bob, please consider donating to the Saginaw Bay Ice Arena or the Fordney Club of Saginaw.
Read Less

To send flowers to the family or plant a tree in memory of Robert J. Bordeaux, please visit our Heartfelt Sympathies Store.

We encourage you to share your most beloved memories of Robert J. here, so that the family and other loved ones can always see it. You can upload cherished photographs, or share your favorite stories, and can even comment on those shared by others.

Posted Jun 09, 2021 at 11:37am
Dear Tracy and Family, Our deepest sympathies, we are thinking of you during this difficult time with heartfelt condolences. Love Cici & Meme Carter

Posted Jun 04, 2021 at 02:20pm
My sincere condolences to the family of Robert J Bordeaux, Bobby, my eldest first cousin. I have fond memories of the times earlier in life up north at the cottage with my Uncle Bob, my father's brother, and my Aunt Dorothy, and my cousins, Bobby, Jimmy, Larry, Jackie and Renee. Many times Bobby taking us on rides in the boat out on the bay with Judi and our other cousins. These memories I hold dearly from these family times together. In more recent years I saw Bobby here in Las Vegas and with my brother Mark and my wife Maria we shared a very nice dinner together. I admired my cousin Bobby for his many accomplishments in life and for his dedication to his family. The Robert J. Bordeaux family is in my thoughts and prayers at this time. May my good cousin Bobby, Rest in Peace. - Thomas J. Bordeaux, Las Vegas, NV.

Flowers were purchased for the family of Robert J. Bordeaux. Send Flowers

Flowers were purchased for the family of Robert J. Bordeaux. Send Flowers

Flowers were purchased and a memorial tree planted for the family of Robert J. Bordeaux. Send Flowers 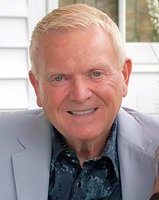