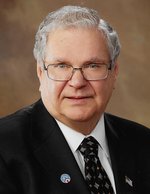 Beloved father and grandfather passed away Thursday, February 11, 2021 at Covenant HealthCare Harrison. Age 80 years. The son of the late William and Sophie (Gorney) LeRoux, Bill was born August 28, 1940 in Saginaw, Michigan. He served in the U.S. Army from 1958-1960. He was previously married to Judy Redmond. Bill was employed at Saginaw Kitchen & Bath for many years. He was an active member of St. Dominic Parish where he served as an usher and was a member of Knights of Columbus Council #4232. He enjoyed playing golf and was a member of Maple Hill Golf Club.

Surviving are three sons, one daughter and their spouses, Dave and Julia LeRoux, Atlanta, Georgia; Jeff and Paige LeRoux, Live Oak, Florida; Ann and Joe Colmus, Traverse City; John and Melissa LeRoux, Saginaw; Bill’s grandchildren, Katelynn (Shaine), Dalton, Christian, Justin, Mason and Maddie; one brother and one sister, Jim and Barb LeRoux, Pat Kubiak; a sister-in-law, Leanne LeRoux; many nieces and nephews and great-nieces and great-nephews. Bill was preceded in death by a granddaughter, Kerstin, a brother, Tom LeRoux, and by a brother-in-law, Bob Kubiak.

Honoring Mr. LeRoux’s wishes, cremation has taken place. A Memorial Mass will be celebrated 11:00 a.m. Thursday, March 11, 2021 at St Dominic Parish-St. Stephen Catholic Church, 2711 Mackinaw Street in Saginaw. Friends may visit at St. Stephen Church where the family will be present on Thursday, March 11, 2021 from 10:00 a.m. until time of Mass. In lieu of flowers, those planning an expressing an expression of sympathy may wish to consider memorials to St. Dominic Parish.