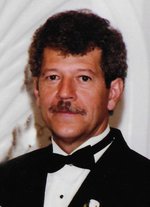 Beloved father, grandfather and brother passed away Monday, January 25, 2021 at Covenant Health Care Harrison. Age 70 years. The son of the late Paul B. Goodwin, Donald Hodges and Ruby (DeForest) Hodges, Terry was born September 4, 1950 in Saginaw, Michigan. He served in the U.S. Marine Corps. Terry was previously married to Vickie Dittmar and later Sharon Kowalesky. He was employed at Saginaw Wilbert Vault for many years. Terry enjoyed gardening and traveling. Most of all, he loved spending time with his family and friends. He will be remembered for his tremendous sense of humor, including his dad jokes.


Funeral service will take place 1:00 p.m. Saturday, January 30, 2021 at The Snow Funeral Home, 3775 N. Center Rd., (between Shattuck and McCarty). Rev. Julie Bailey will officiate with military honors presented by V.F.W. Post #1859 and the United States Marine Corp. Honoring Terry’s wishes, cremation will follow. Friends may visit at the funeral home where the family will be present on Saturday from 11:00 a.m. until time of service.