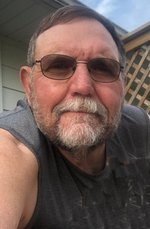 ROGER MICHAEL LEWIS
March 12, 1949 – March 7, 2021
Saginaw, Michigan
Roger Lewis—a loving husband, father, friend and family member—passed away at Covenant
HealthCare. He was 71.
Roger was born on March 12, 1949, in Crossville, Tenn. He grew up in Saginaw, Mich., and
graduated from Arthur Hill High School in 1967. Upon graduation, Roger proudly enlisted in the
Navy and served his country in Vietnam. In 1972, Roger met Suzanne (née Pierce). The couple
wed in 1981 at Holy Family Catholic Church before growing their family in the happy welcoming
of their daughter Ashley a few years later.
An accomplished driver, Roger built a successful career in the transportation industry. Over the
years, he sharpened his expertise through experience, working in numerous capacities across
the industry and owning an interstate trucking company.
He was deeply passionate about the outdoors and enjoyed hunting and fishing. He could often
be found stargazing and tracking the International Space Station on the deck with his wife and
dog, Scout. He was an avid photographer and frequently traveled to photograph ships, nature
and wildlife. He loved grilling and experimenting with new recipes, and his family considered him
quite the gourmet chef. Following retirement, he enjoyed fishing (and catching!) on his boat —
especially with his daughter, Ashley. He was gifted with all things mechanical and was forever
tinkering with “just one more thing” on his boat.
Once known as a man of few words, Roger became quite chatty later in life. If he caught your
ear, you would need to find a chair to listen, as no conversation was complete without a life
lesson (or two). Most of all, he loved spending time with his family. He truly valued what
mattered most.
Survived by him are his immediate family: his wife Suzanne, daughter Ashley (Kurt) and
beloved golden retriever Scout, along with many brothers, sisters-in-law, nieces, nephews, and
his close friends, the McKay Family. Predeceased by him are his parents Beryl Wetherbee and
Ray Lewis.
An outdoor family memorial is planned for late spring or summer.
The family would like to thank Covenant HealthCare for their tireless care and compassion: both
in the family’s lives personally, as well as during this challenging historic period for the world. In
lieu of flowers, an expression of sympathy can be made in Roger’s honor to the Saginaw Basin
Land Conservancy or Girls on the Run Saginaw Bay.