To share your memory on the wall of Maurice (Moke) Lovay, sign in using one of the following options:

Beloved father, grandfather, great-grandfather and great-great-grandfather passed away Thursday, May 27, 2021 at his home surrounded by his family. Age 92 years. The son of the late David and Estelle ... Read More
Maurice D. Lovay

Beloved father, grandfather, great-grandfather and great-great-grandfather passed away Thursday, May 27, 2021 at his home surrounded by his family. Age 92 years. The son of the late David and Estelle (Rheaume) Lovay, Maurice was born August 14, 1928 in Saginaw, Michigan. Moke served in the U.S. Army during the Korean War. He married Bonnie Henderson on July 21, 1951. She predeceased him March 8, 1978. Moke was employed at Dow Corning in Quality Control for 25 years until his retirement. He was an active lifetime member of Holy Family Catholic Church. Moke had an avid love of nature, enjoying hunting, fishing and bicycling. Most of all, Moke loved spending time with his family and friends.

Funeral Liturgy will take place 11:00 a.m. Wednesday, June 2, 2021at Holy Family Catholic Church, 1525 Washington Avenue in Saginaw. Rev. Fr. Randy Kelly and Deacon Roger Pasionek will officiate. Honoring Mr. Lovay’s wishes, cremation will follow with burial of cremains in Mt. Olivet Cemetery. Friends may visit at The Snow Funeral Home, 3775 N. Center Rd., (between Shattuck and McCarty), where the family will be present on Tuesday from 2:00 p.m. to 7:00 p.m. and at Holy Family Catholic Church on Wednesday from 10:00 a.m. until time of Mass. A Vigil Service, led by Tori Little, will take place 6:00 p.m. Tuesday at the funeral home. Those planning an expression of sympathy may wish to consider memorials to the charity of their choice.
Read Less

To send flowers to the family or plant a tree in memory of Maurice (Moke) Lovay, please visit our Heartfelt Sympathies Store.

We encourage you to share your most beloved memories of Maurice (Moke) here, so that the family and other loved ones can always see it. You can upload cherished photographs, or share your favorite stories, and can even comment on those shared by others.

Posted May 29, 2021 at 04:11pm
Laurie and family, you are all in our thoughts. We've chosen to honor the three family loved ones that have passed with these three trees. Love,

3 trees were planted in the memory of Maurice (Moke) Lovay

Posted Jun 03, 2021 at 05:02pm
Uncle Moke was the best! I am Eugene's granddaughter. He was always such a funny, kind man. After my grandpa had passed away I was over visiting with my grandma and noticed a huge rat in her house. I tried to throw a bowl over it, encouraged the cat to catch it and even called an exterminator. Once Uncle Moke heard about all of this he showed up with trap, set it and in about an hour we had a dead rat. All the while laughing.

The world was definitely a better place with him in it. My deepest sympathy to the family.

Posted Jun 02, 2021 at 05:34pm
I worked with this great man at hemlock semiconductor when I was in high school as a co-op student in 1985. He was always one of my favorite people there. He was always smiling and had a kind word to say to me everyday.
Comment Share
Share via:
LK

Posted May 31, 2021 at 04:57pm
Uncle Moke was our favorite uncle growing up. We loved it when he came over to fix the Singer family tv , which was his job when us older kids were younger. He was so much fun, joking around with us and just a wonderful uncle to be around. I always envied his own family of having him as their dad. I know how you must grieve losing him now, but you were so blessed to have him with you so long in your lives. I am glad that I got to visit with him in his home after my sister's funeral. I loved the guy, as I know all his family and mine did too. He enriched the world just being a part of it. He will be missed dearly. My sincerest sympathy to all who loved him. Kathy Singer Meronek
Comment Share
Share via: 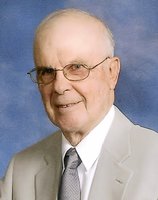