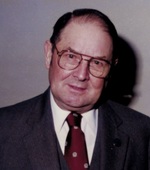 Our beloved husband, father, grandfather, brother, uncle, and friend, Louis D. Robinson, passed away in the late afternoon hours of Friday, March 11, 2022 at Covenant HealthCare – Cooper in Saginaw, Michigan. He was 91 years old. Louis was born on August 24, 1930 in Yardelle, Arkansas to the late Leonard and Donna (Watters) Robinson. Louis was a 1948 graduate of St. Louis High School and on September 13, 1950, Louis was inducted into United States Air Force. He served during the Korean War in Tennessee, New Mexico and Alaska as an aircraft mechanic. On October 5, 1953, Louis married Mary E. Biddlecombe in St. Louis, Michigan, and she survives. Louis began his career working for the Fish and Wildlife Service at the Shiawassee National Wildlife Refuge. He enjoyed observing wildlife, hiking, and helping the Michigan Department of Natural Resources Officers with fish and game enforcement. Following his service at the Refuge, Louis went on to become the first Police Chief of Bridgeport Township, Michigan. Louis was involved, for many years, with numerous Masonic Lodges and was a Past Master of Bridgeport Masonic Lodge #258 and a Deputy District Instructor for Michigan. He also participated in the Bay City Consistory, Scottish Rite and was a very active member of the Royal Arch Masons in Saginaw. Louis was a great mechanic and could fix anything. He was the neighborhood “Fixit” guy and shade tree mechanic. He also enjoyed fishing on the AuSable River and at Drummond Island.

At request of Louis and his family, cremation has taken place and a Memorial Service will be held at 2:00 p.m. on Saturday, March 19, 2022 at The Snow Funeral Home, 3775 N. Center Rd. Saginaw, MI 48603 (Between McCarty and Shattuck Rd.). Officiating will be Rev. Charles Campbell. Visitation will take place at the funeral home from 1:00 p.m. until the time of service. Military Honors will be conducted under the auspices of the United States Air Force and American Legion Post #439. Those planning an expression of sympathy may wish to consider a memorial to the Bridgeport Masonic Lodge #258. Arrangements have been entrusted to The Snow Funeral Home, www.snowfuneralhome.net