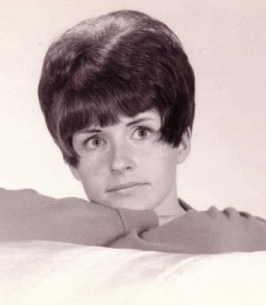 
Kelly Gildenstern excitedly took the hand of her Lord and Savior on the morning of May 31, 2022, leaving behind a heady wake and a ripple effect of the life she lived, the lives she touched and the love she so freely gave.

Kelly came into the world in the usual way on July 7, 1948. A casual observer might say she lived a fairly vanilla existence, but that wouldn’t be accurate. Kelly was a charismatic ray of sunshine at every phase of her life here on earth and left a trail of kindness and irreverent giggles everywhere she walked. She adored her sister, Candy (Largent) Womble and her parents, Jean (Cowan) Budden and Jack “Papa” Budden. Kelly graduated from Sexton High School in Lansing, MI and a few years later, she met the boy. He was working as a DJ when she first saw him and the sparks flew. His beefy mutton chops and orange bell-bottoms… she couldn’t resist. So, on a chilly November afternoon in 1968, clad in a stunning dress that could’ve been plucked straight from a fashion magazine, she wed the love of her life, partner in non-prosecutable crime, and her best friend, Bill Gildenstern, to whom she would call her hubby for fifty wonderful years. Their quirky love story was punctuated by a warm home that was always open to anyone, three pretty cool kids, (Chris, Doug and Wendy), a couple advertising agencies, and eventually, a quiver of fourteen grandchildren and six great-grandchildren.

She dabbled in several professions; marketing, bookkeeping, voice talent, tv commercial set and prop assistant. A renaissance woman with many talents, the hats she wore most proudly were as an artist and a hospital chaplain: roles which only accentuate her spirit as a creative soul who loved well. Kelly sold her crafts at church bazaars and taught various art classes in and around Saginaw, while her chaplaincy afforded her the chance to provide the warmth and comfort of Christ to people in their most difficult times.

In the late seventies, Kelly accepted Christ’s truth and sacrifice and became a spirit-filled Catholic. She found her relationship with Jesus in the ritual of the Catholic Church and for decades, she was very active in her home church, St. Thomas Aquinas, in Saginaw, MI. She was a layperson, a member of the Charismatic Group, a Eucharistic Minister in church and to the homebound, a Cursillista, and a leader in CRHP (Christ Renews His Parish). In the 1990’s, Kelly and Bill, along with friends John and Debbie Giaier, created The Rosary Tapes, (now known as the Rockin’ Rosary), with original Grammy nominated music that received accolades from the Vatican. She was so proud of her part in this project and what the heck, she’d love this little plug - Go to www.rockinrosary.com to learn more. :)

Kelly was a brilliant wordsmith who could define, spell and give the etymology to any word thrown her way. She was handy, she was wise, she was humble and she would give until it hurt and then give some more. This was our Kelly.

She fiercely battled dementia in the last years of her life, and just as the end of a story doesn’t convey the beginning or the middle, so it was with Kelly. As familiar faces became less familiar, sentences became increasingly difficult to utter and ultimately, words themselves were a challenge of their own, she still missed her Bill, (who beat her to the finish line in 2019), and her faith, love, generosity and silliness still never left her. Even when she could barely form words, she’d still sing, she’d still pray, she continued to bless people. Her faith in Christ, her faith in action, her unswerving love for others… THIS is the inheritance she left behind.

A Celebration of Life Party will be planned in the near future and and in lieu of flowers, it was Kelly’s (and Bill’s) request that you pray for an hour for someone you love and then hug the snot out of them.