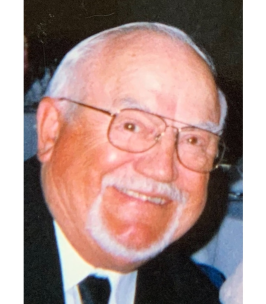 
Beloved father, grandfather and great-grandfather passed away peacefully on Sunday, June 5, 2022 under the compassionate care of Toni and Trish House in Auburn. Age 97 years. The son of the late Joseph and Theresa (Kruk) Kusnierz, Joe was born on October 7, 1924 in Saginaw, Michigan. Joe graduated from Arthur Hill Tech School before enlisting in the United States Navy. He proudly served during WWII from 1943 until 1946. He married the love of his life, Phyllis Ellis, on September 25, 1954. She predeceased him on July 22, 2014. Joe served on the Saginaw City Fire Department from June 20, 1949, promoted to Captain on July 1, 1967 and retired on March 29, 1984. His greatest joys in life were his family, his Catholic faith, fishing, camping, and definitely sampling Phyllis’ pies.


The family would like to extend their sincere appreciation to the staff of Visiting Angels, V.N.A. Hospice and Toni and Trish House for their loving and compassionate care.


Funeral Liturgy will take place at 11:30 a.m. on Wednesday, June 8, 2022 at Christ the Good Shepherd Catholic Church- St. Helen site, 2445 N. Charles St. Rev. Fr. Balta Raj Bandaru will officiate. Interment will follow in Roselawn Memorial Gardens with Military Honors rendered by V.F.W. Post #1859. Friends may visit at the church where the family will be present on Wednesday from 9:30 a.m. until the time of Mass. In lieu of flowers, those planning an expression of sympathy may wish to consider memorials to the Toni and Trish House. Funeral arrangements have been entrusted to The Snow Funeral Home, 3775 N. Center Rd.