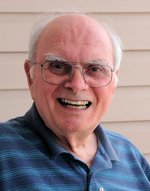 Joseph died peacefully on March 11, 2021 at Covenant Harrison 7 Main. Joseph was holding the hand of his beloved daughter as she whispered in his ear how much she loved him as he embraced the hand of Jesus and his beloved wife Margaret. Age 86 years. Joseph was born April 12, 1934 to the late Samuel and Antoinette (Noykos) Meo in Saginaw, Michigan. He married his loving wife of 55 years, Margaret Violet Meo on June 20, 1959, where she predeceased him on March 17, 2015. He was of the Catholic faith and over the years had attended various services at Our Lady of Mount Carmel, Holy Rosary, St. Joseph, St. Helen, and St. Thomas Churches. Joseph attended Saginaw Public Schools and was a proud graduate of Saginaw High School Class of 1952. He loved reminiscing about being a linebacker on the SHS Trojan Football Team and looked forward to the class reunions. Sharing stories of times spent with the high school and neighborhood friends (especially Jerry, John, and Joe “Cherry”) brought a smile to his face, they are all enjoying those stories in Heaven now. He loved sharing stories about times spent with special family members Kathleen, Mary Ellen, Margaret Ann “Maggie”, and John Corcoran. Joseph proudly served in the United States Army during the Korean War. Joseph was employed as an electrician at the Ship Yards in San Diego and a devoted employee of General Motors working at Saginaw Parts Plant and Flint’s V-8 Engine retiring in 1998. While at General Motors he had a special friend, Gary Fischer, whom he looked forward to talking to every Christmas.

Joseph will be missed by many, but especially his loving and devoted daughter who was his caregiver over the past six years after a stroke left him unable to live independently. Through the wonderful care provided from Visiting Angels of Frankenmuth he was able to remain home. A very special Thank You to one of his primary caregivers, Janie Sanchez, whom he loved dearly and also Carol and Barb. His beloved sibling, Phyllis Martin of Saginaw with whom he talked with almost nightly. Special nieces and nephew, Debbie Hutchison (Jeff, Jamie, and Carley), Jim (Jackie) Martin (Julie and Jody), and Karen (Tim) Martin (Rachael, TJ< Nick, Kara, and Kate). A special niece and her family from his wife’s side, Janet (James) Kowalski and their children Dawn, Heather Wiles (Tyler, Katelyn, Hannah, Madelyn), whom he considered like grandchildren. He also leaves behind to cherish his memory a niece Dorothy (Wayne) Mayou, Meridith (Marco) Isome, Michelle (Joe) Wardlow, and Jennifer (Raphael) Rodriquez and many nieces and nephews. He also leaves behind a sister-in-law Aija Gillam. He was preceded in death by brother-in-law James W. Martin; Earl (Lorrice), John and Frank Gillam, sisters-in-law Dorothy Gillam, Bertha (Dan) Pildner, Virginia (Gordon) Hammer, Marie (Louis) Periard, and Arlene (John) Gillam.

Funeral Service will take place 10:00 a.m. Monday, March 15, 2021 at the Snow Funeral Home, 3775 N. Center Rd. (between Shattuck and McCarty). Pastoral Associate Tori Little will officiate. Entombment will take place at Oakwood Mausoleum with Military Honors conducted by V.F.W. Post 1859. Friends may visit at the Snow Funeral Home, where the family will be present on Sunday, from 1:00 p.m. to 5:00 p.m. In accordance with the Michigan Department of Health and Human Services ordinance, the limitations of number gathered, mask wearing and social distancing will be observed. Those planning an expression of sympathy may wish to consider memorials to Saginaw Children’s Zoo.