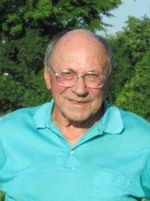 Beloved father, grandfather and brother passed away Sunday, February 14, 2021 at the Toni and Trish House in Auburn, Michigan. Age 88 years. The son of the late Paul and Mary (Gombar) Moncman, John was born on May 13, 1932 in Munger, Michigan. He served in the U.S. Army during the Korean War. He married Rosemary Swantek, his loving wife of 65 years, on September 19, 1953. She preceded him June 26, 2018. John was an auto mechanic for Garber Cadillac, then became owner and operator of Green Acres Shell for over 30 years and Bay Valley Marathon. After retirement he was employed at Car Quest Auto Parts and was a Charter Captain owning Y-Knot Charters out of Caseville, Michigan. He enjoyed fishing, hunting, gardening, the casino, playing scrabble and Euchre, loved nature and silly jokes.

Honoring Mr. Moncman’s wishes cremation has taken place. A private memorial service will take place with the family and a Celebration of Life will take place at a later date. In lieu of flowers, those planning an expression of sympathy may wish to consider memorials to the Toni and Trish House, 4699 Eleven Mile Rd., Auburn, Michigan 48611. Please share memories and condolences at snowfuneralhome.net