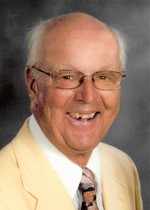 Beloved husband, father and grandfather passed away Saturday April 3, 2021 at the Aleda E. Lutz V.A. Medical Center. Age 87 years. Son of the late Hans and Anita (Steffen) Beier, Guenther was born January 27, 1934 in Saginaw, Michigan. He graduated from the old Saginaw High School and attended Bay City Junior College and Central Michigan University. Guenther served in the U.S. Navy during the Korean War and was a member of American Legion Post #439. He married Sheryl McGill, his loving wife of 55 years, on June 26, 1965. She survives him. Guenther was employed at Saginaw Grey Iron Metal Castings Plant for 30 years until his retirement in 1987. He was a member of Peace Lutheran Church and sang in its choir. He was also a former member of the Frankenmuth Conservation Club and the G.M. Salaried Retiree’s Club. He enjoyed golfing, music, U of M sports and especially spending time with his family.

Funeral Service will take place 11:30 a.m. Thursday, April 8, 2021 at Peace Lutheran Church, 3427 Adams, Saginaw. Vicar Henry Pahlkotter will officiate. Interment will follow in Roselawn Memorial Gardens where Military Services will be conducted by American Legion Post #439. Friends may visit at the Snow Funeral Home, 3775 N. Center Rd. (between Shattuck and McCarty), where the family will be present on Wednesday from 3:00 p.m. to 7:00 p.m. and at Peace Lutheran Church on Thursday from 10:30 a.m. until time of service. In accordance with the Michigan Department of Health and Human Services ordinance, the limitations of number gathered, mask wearing and social distancing will be observed. In lieu of flowers, those planning an expression of sympathy may wish to consider memorials to Peace Lutheran Church or Aleda E. Lutz V.A. Palliative Care Unit