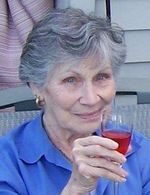 Beloved mother, grandmother, great-grandmother and great-great-grandmother passed away Wednesday, February 10, 2021. Age 98 years. The daughter of the late Leo and Clara (Hackett) Swarthout, Faye was born June 9, 1922 in Midland, Michigan. She married Gerald P. Chauvette on April 10, 1943. He predeceased her March 10, 2013. She was a member of St. Thomas Aquinas Catholic Church in Saginaw. Faye and Jerry had lived in Gladwin for many years. While there, they belonged to Sacred Heart Catholic Church. Faye had a special devotion to the Blessed Mother and prayed the Rosary frequently. She enjoyed bowling and was proud of her election to the Gladwin Bowling Hall of Fame. Faye enjoyed playing cards, crocheting, cooking and loved spending time with her family and friends.


Honoring Mrs. Chauvette’s wishes, cremation has taken place and a memorial service will be scheduled for a later date. In lieu of flowers, those planning an expression of sympathy may wish to consider memorials to the charity of their choice.