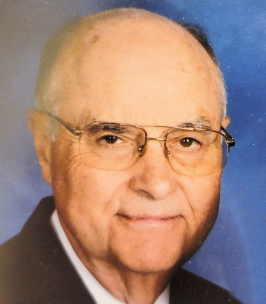 Beloved husband, father, grandfather and great-grandfather passed away on May 15th, 2022 at the age of 86. He was born on March 21, 1936 in Pigeon, Michigan. His parents were Christian and Elizabeth (Hassler) Swartzendruber. He graduated from Pigeon High School in 1954 and was the class Valedictorian. He graduated from General Motors Institute in 1959 and was a member of the College’s Honorary Scholastic Fraternity. Donald married Frances Roberts in 1959 in Palms, Michigan. He served in the United States Marine Corp and then began his career working for General Motors Central Foundry Division in Saginaw. He worked in numerous Engineering assignments in both the Saginaw Malleable Iron Plant attaining the level of Superintendent. He then transferred to Central Foundry’s Divisional Offices attaining the level of Staff Product Engineer. He retired from Central Foundry in 1990 but continued working full time for 7 years and part-time for 3 years as a Contract Engineer at Delphi Chassis Division in Saginaw.

Funeral Liturgy will take place at 10:30 a.m. on Friday, May 20, 2022 at St. Thomas Aquinas Catholic Church, 5376 State Street. Rev. Fr. Richard Bokinskie will officiate with entombment in Mt. Olivet Mausoleum. Friends may visit at the Snow Funeral Home, 3775 Center Rd. (between Shattuck and McCarty) where the family will be present on Thursday from 2:00 p.m. until 7:00 p.m. and on Friday at the church from 9:30 a.m. until the time of Mass. Knights of Columbus Council #4232 will pray the Rosary at 3:00 p.m. on Thursday at the funeral home. Those planning on an expression of sympathy my wish to consider memorials to St. Thomas Aquinas Catholic Church or Covenant V.N.A. Hospice.